For the fourth year in a row, Billie Eilish has demonstrated immense personal growth from the years previous in the recent Vanity Fair video titled “Billie Eilish: Same Interview, The Fourth Year.”

The pop star covered a lot about herself in the half-hour-long video interspersed with clips of her past answers along with what she has to say for herself this year.

As someone who has been a faithful Eilish fan since early 2019, it’s heartwarming to see my favorite singer-songwriter grow more mature every year. I’ve admittedly had a one-sided love-hate relationship with Eilish ever since a friend introduced me to her chillingly cinematic “bury a friend” early last year.

My love for Eilish is grounded in the fact that she is unlike any artist I have ever seen. By defying musical convention in “WHEN WE ALL FALL ASLEEP, WHERE DO WE GO?” using bassy-heavy, intricate musical production to back up her raw, darkly angelic vocals, Billie has created an entire genre of her own that we lazily label as “pop.”

Onstage, Eilish is a natural performer, someone who genuinely feeds off of the crowd and is nearly flawless in live performance.

On-camera, Eilish is unapologetically herself. To call her style “chaotic” is an understatement. She gives off an undeniable authenticity on camera, which is probably one main reason why her Vanity Fair interview series has been so successful for these past four years.

Eilish is also extremely loving to her fans. Having met her at our local DMV when we were both taking our driver’s license tests, I can personally attest to her kindness and gratitude for those who enjoy her music. The picture of her sticking her tongue out while winking at the camera with her arm around my shoulders is pinned to the corkboard across my bed. It’s not my favorite picture of all time, considering my hair looks—and is—three days unwashed and the panic in my face from trying to stop hyperventilating is more than apparent in my strained smile. But it documents a memory nice enough to wake up to everyday.

However, even though I am one of Eilish’s biggest fans — in the top 0.05% of her Spotify listeners — I’m also one of her biggest critics. Because she is far from perfect.

In a 2019 Pitchfork interview, Eilish claimed that parents who don’t homeschool their kids are just “lazy as fuck,” demonstrating a complete lack of awareness that not all parents have the luxury and financial means to be able to not work and educate their children from home. Her reaction to the legendary “Saturday Night Live” ladies Kristen Wiig and Maya Rudolph presenting at the 2019 Oscars earned a lot of criticism and flack since many thought the confused, gnarled look on Billie’s face to be disrespectful to two of the most celebrated women in comedy.

Many who come to Eilish’s defense about the Pitchfork interview point out that she has since said she was “embarrassed” by it in a Capital FM interview. While she does express regret for what she talked about in the Pitchfork interview, such as pooping and liking the taste of blood and dirty jewelry, Eilish still does not apologize nor express any remorse for what she said about parents being “lazy as fuck” for sending kids to school during the day.

Not to mention, according to a lengthy, libcom.org article, Eilish is complicit in the gentrification of the city she grew up in, Highland Park, California. While it may not be entirely her fault that her parents helped gentrify the area, the article alleges that she has not made any effort to recognize the damage gentrification has done to the town she grew up in.

As much as I love her, I am not at all afraid to admit that sometimes, Eilish can come off like a brat.

Still, she’s only 18. Given her fame, she’s had to grow up much faster than a lot of us. And these annual Vanity Fair interviews are proof that she has at least somewhat risen to the occasion.

In the “Fourth Year” Vanity Fair interview, Eilish expresses her humility and gratitude for still having her family during the turmoil and tragedy wrought on by the COVID-19 pandemic.

“I’m very, very lucky to have this year play out the way it did, because, for a lot of people, it was literal hell. And I am very aware that I have been pretty blessed for the fortune that I’ve had this year,” she says.

It’s refreshing to see a celebrity who has not been abusing their privilege to party during the pandemic, much unlike supermodel Kendall Jenner, rapper Megan Thee Stallion, YouTuber Jake Paul — who called COVID-19 a “hoax” — rapper Cardi B and singer-songwriter Rita Ora.

Eilish has been known to criticize people who party in the age of COVID-19. She also mentions in the Vanity Fair interview how she had been attending protests and how she became more aware of the climate crisis this year. She also directly references Breonna Taylor, a young black woman who was shot and killed by police officers during a wrongful raid of her apartment.

But Billie’s support for causes greater than herself isn’t the strongest evidence of how much she’s grown since the past year. As “woke” as she may be now, she has yet to address the more local issues of gentrification in her own neighborhood. 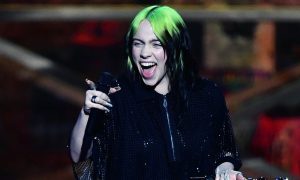 Instead, Billie’s personal growth is evidenced by the “identity crisis” she says she experienced this year. “I felt like I was pretending to be Billie Eilish,” she says of a radio show she did in December of 2019. “I just felt like a parody of myself.”

Considering the young star’s rapid rise to fame, such a confession from Eilish comes at no surprise. At the age of 17, the singer-songwriter already formed an identity for herself that seemed inextricably linked to neon green, spiders, a mysterious black liquid that pours out of her eyes and general Satanic imagery—which all tend to be things that young people eventually grow out of.

Eilish has long begun the process shedding of the edgy, 17 year-old persona she put out in her very first album. While her latest single “Therefore I Am” is reminiscent of her dark, badass, mysterious “bad guy” days, her more recent releases—especially the Grammy-nominated “everything I wanted” and synthy, soulful “my future” (which was much more deserving of the Grammy nomination)—are grounded in vulnerability and truth, much more so than her “simpier” songs about unrequited love such as “wish you were gay,” “i love you,” and “8.”

“It’s funny that I’m supposed to have found myself and stick with it,” says Eilish in the Vanity Fair interview. “I’m [just] trying different ways of living and styles and personalities … Because I’m a growing fucking girl.”

That growth so far has brought us the Eilish we know today, who I—despite her flaws—still like a lot. She at least seems more aware of her privilege, but still yet to fully grasp it.

Eilish no longer doesn’t seem like she’s trying to be the “WHEN WE ALL FALL ASLEEP, WHERE DO WE GO?” version of herself. Instead, her music has evolved from being dark, dreary and edgy to catchy anthems of self-love.

Still, we’ll have to wait and see for the release of the “16 songs” she is working on to really tell if Eillish is growing out of her “WHEN WE ALL FALL ASLEEP, WHERE DO WE GO?” phase for good.

Author Bio: Kaitlin Aquino is an Anteater TV intern for the 2020-21 academic year and is an undergraduate student at UC Irvine.